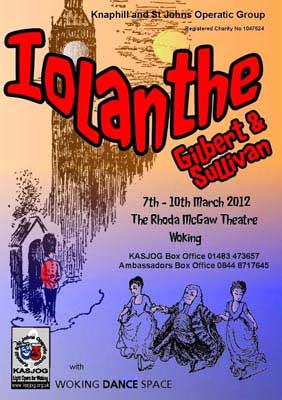 Despite sore toes and sweaty wigs (or was that the other way around?), members of the Tuesday ballet crew successfully survived four performances of Iolanthe with KASJOG, including two on the Saturday (i.e. very sore toes).

In fact they all reported having a jolly good time, and totally indulged in over acting as well as secretly admiring the neon glow wigs so much they are reputed to have kept them (you know who you are people!!).

Extract from the NODA report...

The production opened with a bevy of fairies – perhaps a fascination of fairies might be the collective noun –?? They danced to the music of the overture which was an excellent introduction to the operetta as overtures these days seem to be too long and boring except to the aficionados. Their entrance was very effective as they were dressed in white ballerina costumes with fantastic coloured bobbed ersatz wigs. They were a delight to watch.

This team from the Woking Dance Space were expertly choreographed by Gretchen who also choreographed the KASJOG company. Well done all of you. When the chorus fairies joined them also costumed in the same fashion each fairy had her own character and played to her individual strength. They formed tight little groups and adorned the stage.